In Which Our Character is Conformed to God’s Name, Via The Pursuit of Wisdom

In our first twelve-week series on Theological Foundations, we focused on what it means to be “baptized into the name of the Father, Son, and Holy Spirit“, moving from sin to sanctification as the body of Christ entering into His Kingdom.

In this our second series, we focus on how we can appropriate that “name” in our own lives — as well as those of the people we lead and serve. This is the essence of Christian Character, the second leg of our “LEAD” tripod (the third and final one being “Skills for Service”, coming in Spring 2009).

The goal of character formation is to bring our “whole person” into alignment with the “whole name” of God — His identity, character, and purpose. We can define the whole person using the “triplet” model below, which has: 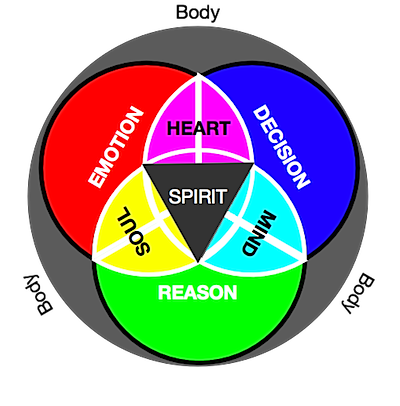 While all models are imperfect, and there are many other ways to picture the human psyche, this diagram will help us understand the role of Wisdom in character formation — and how we fall short…
Admonition

Read Proverbs 1. Why is Wisdom so important?

We begin in the Psalms, where find a beautiful illustration of many of the themes which will shape our study of wisdom:

The first and most essential truth we must confront is that God is good. This may seem so obvious as to be a cliché, yet the Psalmist chose to command the Israelites to appreciate it. For while God’s goodness may sound nice in theory, the practical implications are often difficult to swallow. [C.1]

Which may be why the Psalmist takes pain to remind us:

In particular, we earlier defined goodness as “fitness for a purpose.” If God is truly good, then that means He is perfectly suited to His role as ruler of the universe, and that everything He does is completely in line with His purpose: glorifying His name through all creation — including us:

Unfortunately, we mortals do not so easily accept our role as His creatures; in fact, we would rather take over God’s role as arbiters of our own destiny! Nonetheless, our purpose is to be conformed to His image — which again sounds nice in the abstract, but can be quite painful in reality. [C.2]

Because that process is so difficult, we usually substitute something else for His image. We may recognize and work on our own imperfections, but only with respect to the higher desires of our own spirit — what Freud might call the super-ego.

Those innate desires are the result of many influences: e.g., our upbringing, culture, education, and religious instruction. Those standards do have some value, at least in terms of societal benefit; yet they –even religious ones! — are ultimately human constructions, and thus fall short of the fulness of God’s character. [C.3]

The practice of measuring ourselves against human standards — of treating “man as the measure of all things” — is usually labeled “humanism” (though the term also has other, more benign uses). As Christians, we reject the philosophy of humanism with our heads, yet often practice it in our hearts.

The relation between them is summarized in the following table:

We can roughly map these onto our personality chart above, for example: 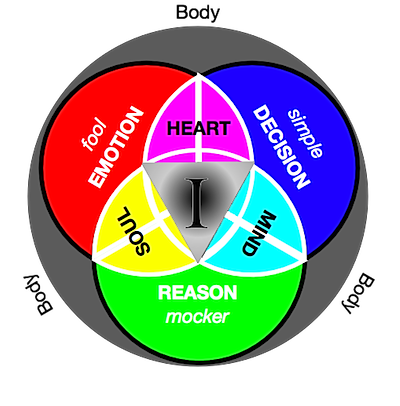 We all sometimes fall into each of these categories, though most of us tend towards one or the other. [C.4]

The root cause of all of them, though, is a desire to live life on our terms, rather than submit to God’s instruction. This is why the “fear of the Lord is the beginning of wisdom” (cf. Proverbs 1:7).

God’s purpose is to form His image in us — which ultimately is our only route to true happiness, holiness, and honor. Yet to do that, He must first break us of the idolatry of self.

This is what we see in Psalm 107. God in his mercy deals with each of these three idolatries in turn, starting with the Simple:

4They wandered in the wilderness in a desolate way; They found no city to dwell in. 5Hungry and thirsty, Their soul fainted in them.

This is the plight of the Simple, to wander directionless in the world without wisdom until their trust in their own simplicity gives out. But if they have sufficient Faith in God’s unseen wisdom to cry to the Lord (instead of turning to a Mocker), He will show them the right way and establish them in a safe place.

6Then they cried out to the LORD in their trouble, [And] He delivered them out of their distresses. 7And He led them forth by the right way, That they might go to a city for a dwelling place.

8Oh, that [men] would give thanks to the LORD [for] His goodness, And [for] His wonderful works to the children of men! 9For He satisfies the longing soul, And fills the hungry soul with goodness.

Next, we see how God must deal with the Mocker:

10Those who sat in darkness and in the shadow of death, Bound in affliction and irons– 11Because they rebelled against the words of God, And despised the counsel of the Most High, 12Therefore He brought down their heart with labor; They fell down, and [there was] none to help.

Because the Mocker’s heart is full of pride, God in His mercy must afflict them so that they lose faith in themselves. But if they come to Hope that God’s wisdom surpasses theirs — instead of escaping to Folly — then He can deliver them:

13Then they cried out to the LORD in their trouble, [And] He saved them out of their distresses. 14He brought them out of darkness and the shadow of death, And broke their chains in pieces.

15Oh, that [men] would give thanks to the LORD [for] His goodness, And [for] His wonderful works to the children of men! 16For He has broken the gates of bronze, And cut the bars of iron in two.

Finally, we come to the Fool, whom in modern terms we can describe as an Addict — someone whose devotion is focused on a self-destructive substance or behavior (cf. Proverbs 26:11), instead of wisdom:

The Fool is trapped in a vicious cycle of self-punishment, which can easily lead to death. But if they embrace God’s Love before it is too late, they can still be healed:

19Then they cried out to the LORD in their trouble, [And] He saved them out of their distresses. 20He sent His word and healed them, And delivered [them] from their destructions.

21Oh, that [men] would give thanks to the LORD [for] His goodness, And [for] His wonderful works to the children of men! 22Let them sacrifice the sacrifices of thanksgiving, And declare His works with rejoicing.

The three theological virtues — Faith, Hope, and Love — are what each of these personalities need to embrace God’s wisdom, through the power of the cross of Christ, as illustrated in the following diagram:

We will study each of these in more detail over the next three lessons. [C.5]

However, lest we think tribulation is always focused on specific character flaws, the Psalmist reminds us that some trials are common to all people:

23Those who go down to the sea in ships, Who do business on great waters, 24They see the works of the LORD, And His wonders in the deep. 25For He commands and raises the stormy wind, Which lifts up the waves of the sea. 26They mount up to the heavens, They go down again to the depths; Their soul melts because of trouble. 27They reel to and fro, and stagger like a drunken man, And are at their wits’ end.

Yet even here the solution is the same:

28Then they cry out to the LORD in their trouble, And He brings them out of their distresses. 29He calms the storm, So that its waves are still. 30Then they are glad because they are quiet; So He guides them to their desired haven.

31Oh, that [men] would give thanks to the LORD [for] His goodness, And [for] His wonderful works to the children of men! 32Let them exalt Him also in the assembly of the people, And praise Him in the company of the elders.

33He turns rivers into a wilderness, And the watersprings into dry ground; 34A fruitful land into barrenness, For the wickedness of those who dwell in it. 35He turns a wilderness into pools of water, And dry land into watersprings.

And His goodness (His unending mercy):

36There He makes the hungry dwell, That they may establish a city for a dwelling place, 37And sow fields and plant vineyards, That they may yield a fruitful harvest. 38He also blesses them, and they multiply greatly; And He does not let their cattle decrease.

For God is at work through all human affliction, to remind us that we are but dust:

39When they are diminished and brought low Through oppression, affliction and sorrow, 40He pours contempt on princes, And causes them to wander in the wilderness [where there is] no way;

Why? To bring glory to His name — and joy to our souls — by showing the riches of His wisdom and mercy:

41Yet He sets the poor on high, far from affliction, And makes [their] families like a flock. 42The righteous see [it] and rejoice, And all iniquity stops its mouth. 3Whoever [is] wise will observe these [things], And they will understand the lovingkindness of the LORD.

The question is, do we have the eyes to see what God is doing, and the heart to submit to it?

For next week, read Hebrews 11. How does faith produce works? At what cost?

One thought on “LEAD! B.1 From Humanism to Wisdom”

This site uses Akismet to reduce spam. Learn how your comment data is processed.